Staplers was formed in 1958 in Hitchin, Hertfordshire. 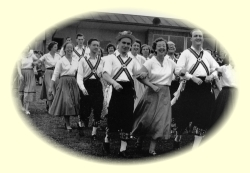 The name was chosen because of Hitchin's history as a wool market or 'staple' town. Much of the wealth of Hitchin in times past came from the wool trade and evidence of this can be seen in the Hitchin Parish church, St Mary's.

The club colours were also chosen to represent two trades which were very important to the town. Lavender was grown extensively to produce oil for Victorian and Edwardian ladies to smell nice. Interestingly the industry is being revived by Hitchin Lavender who have planted a field near Ickleford.

The straw colour represents 'straw plaiting' which was performed as a cottage industry by many to feed the hat factories in nearby Luton. Straw boaters are part of our display costume.

Come and Join us